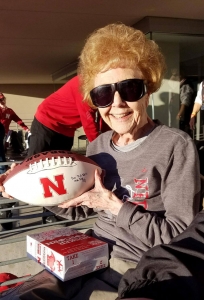 Donna has lived in Nebraska her whole life. Growing up in Wisner and calling Fremont home for more than 50 years. Donna cannot remember a time when she wasn’t cheering for the Huskers. Even through bad seasons, she is a faithful fan. Donna’s husband wasn’t much of a Husker fan, but he always sat with his wife, watching and cheering for the team she loved. When Donna’s husband became ill, she was his primary caregiver for almost two years until he passed in 2016. Her focus was always to her husband, not worrying about herself. Since, his passing, Donna has been focusing on herself and her health. She has been living with chronic back pain for many years that has developed into spinal stenosis and degenerative disc disease. 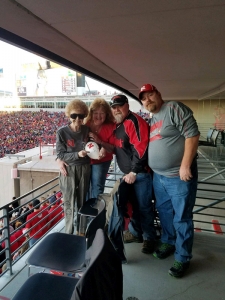 Donna’s daughter, Karla, works for Vetter Health Services, a generous partner of the Dreamweaver Foundation. She nominated her mom hoping attending a Husker game would give her mom something to look forward to. Dreamweaver met with Donna surprising her with four tickets donated by Nebraska Athletics to the last home game of the season against the Iowa Hawkeyes. Donna was also given new Husker apparel from Scheels. She was shocked someone would do something so thoughtful.

On a 60-degree day in November, Donna sat in Memorial Stadium for the second time in her life watching her favorite team. Karla said, “Almost didn’t matter we lost because the Husker experience for her was amazing!”

We want to thank our community partners for helping us fulfill this dream, Vetter Health, Scheels and Husker Athletics.