Dick has always loved trains, and upon retiring from his job as cabinet maker, he dove into his passion by volunteering at The Durham Museum where he became known for his lively guided tours. Dick grew up near the tracks in South Sioux City and was always fascinated by the trains that rolled by. He became a self-taught railroad and train expert, learning everything there is to know about the Burlington Route’s steam locomotives, and the people who rode them.  Dick’s hospice social worker, Makenzie, who shared his interest in trains, knew that returning to The Durham Museum would be a Dream come true for Dick, so she nominated him to receive a Dream.

Dick was thrilled for the chance to see his beloved exhibits again, but he was most excited about sharing the experience 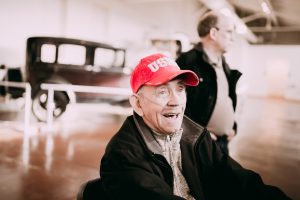 (and his vast knowledge!) with others!  It’s no surprise that Dick had a big group who wanted to tag along for this Dream—including his three sons, his hospice social worker, and a Dreamweaver volunteer.

Dick’s enthusiastic tours and zest for history had left quite an impression with the staff at The Durham Museum, and they graciously opened their doors early and waived the admission fees for Dick and his party.  Dick thoroughly enjoyed being back in his happy place at the museum and in the spotlight as an expert tour guide.  In addition to the trains that he knew so much about, Dick also proudly showed off the cabinets he had built that now house a coin collection at the museum.

We knew that this would be a morning Dick and his family would not want to forget, so we sent a professional photographer along to capture the magic and the sparkle in Dick’s eyes.  Photos were taken of the family together in front of The Durham Museum’s beautiful Christmas tree and enjoying old fashioned refreshments at the soda fountain.  Dick’s smile lit up the room when he took a sip of his favorite treat—an old-fashioned cherry soda!

Dreamweaver Foundation would like to thank our friends at VIP Limo for transporting Dick to the museum in style, The Durham Museum for their kind hospitality to our Dreamer, and to Amber Rae Photography for helping us capture this beautiful morning forever, for Dick and his family to enjoy.