The last 8 years have been very rough for Dreamer Dave Davison.  Dave was born with the defective gene that causes Cystic Fibrosis (CF), a disease that causes persistent lung infections and limits a person’s ability to breathe.  Dave knew that CF could affect the digestive track, but had no idea how it could manifest.  In 2009, Dave found out just how bad it could be and was diagnosed with severe pancreatitis.  For several years, Dave was in the hospital several times a month and when he wasn’t hospitalized, he was at home, in bed unable to function. 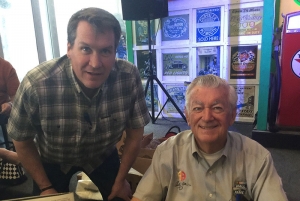 Dave knew that between the pancreatitis and the pain medication, this disease was killing him and he couldn’t go on like this.  So, in 2015, Dave agreed to a Pancreatectomy and islet cell transplant.   The transplant came with many risks, but Dave knew it was the only option.  He went in with a positive attitude…he thought he would be home within a couple of weeks and would be someone back to his old self.  But during those first two weeks after surgery, things did not go as planned and we almost lost Dave altogether.  There were several moments that were touch and go.  The days turned into weeks and weeks into a month.  On day 31, the hospital was planning to move Dave into a skilled nursing facility where he could continue his slow recovery.  But Dave insisted on being at home, surrounded by those who love him most.

Day-by-day, Dave slowly started to regain his strength and improve.  It was an incredibly long recovery, as if 2015 never even existed for him.  Dave continued to recover throughout 2016, getting used to his new normal.  Dave says, “Life is completely different than it used to be, but I am still here. Even if I’m having a rough day, it’s still a day and I am thankful.”

A friend of the Foundation introduced us to Dave and his wife Julie at the end of 2016, nominating Dave for a Dream of a Life-time.  Dave has always been a fan of NASCAR.  Enjoying the races even through his recovery, but had never been to a race in person.  As we got to know Dave, we also learned that he had family that he would love to see in Daytona, Florida.  It seemed as if Dreamweaver could make two dreams come true in one trip, and so the planning began.

Getting Dave and Julie to the Daytona 500 at the end of February was the plan.  We contact NASCAR and the graciously helped us to get tickets to the Race, as well as a Fan Pass that allowed Dave and Julie some Pitt Access and an opportunity to sign the start and finish line at Daytona.  We also reached out to our friends at Textron Aviation.  They jumped at the opportunity to volunteer with this dream, and landed Hot Passes for the Davison’s on the Saturday prior to the big race and a Meet and Great with several of the NASCAR drivers.  Dave was set to go on a trip of a lifetime!  Dave and Julie kept in touch with Dreamweaver the entire trip.  You could hear the excitement in Dave’s voice, like a kid in a candy store.  Dave said, “Not only did I get to watch a NASCAR race in person, but it was the Daytona 500!!   And not only did I watch it in person, but I watched it from Pit Road…. on top of Jamie McMurray’s pit box!”