Dave loves watching all sports, but his favorite to watch is Nebraska Football.

Dave grew up watching Husker football with his dad and brothers.  When he became a father himself to five boys and three girls, he shared his love for football with his children.  Every Saturday, Dave’s family would get together to watch the Huskers play.  Jason, Dave’s son, remembers watching Husker games together was a family tradition; grandpa, uncles, cousins, brothers, and of course his dad – everyone was together.  “It was a like reunion every Saturday.” We were a “family in red.”

Dave was an avid game attender until 2015 when he was diagnosed with ALS.  He currently resides at Countryside Nursing Home in Madison.  Dave told Kristi, Director of Social Services, and other staff members of his Dream to attend one more Husker game.  Kristi knew of the Dreamweaver Foundation because we recently fulfilled a Dream for another Countryside resident.  So, she nominated Dave, keeping her fingers crossed he would get to sit in Memorial Stadium one more time. 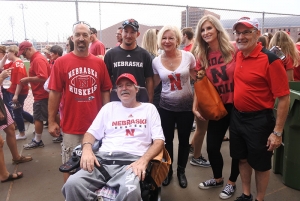 With help from Dave’s daughter-in-law, LeAnn, Dreamweaver started planning his Dream.  On a crisp fall morning; Dave and two of his sons; Jason and David Jr, left Madison in route to Memorial Stadium.  The day before, the Dreamweaver Team presented Dave with his tickets donated by the Huskers and new Husker apparel donated by Scheels.  Dave and his sons were welcomed into Memorial Stadium by Dreamweaver Foundation board members and Cheri, executive director.  It was a perfect day for a football game.  During the first quarter, staff members from Memorial Stadium personally thanked game for attending the game and presented him with a signed program from Coach Mike Riley.

LeAnn said, “He had a wonderful day! THANK YOU so very much! He wants us to extend his thanks for EVERYTHING.”