With a dad who worked as a diesel mechanic while he was growing up, the garage was Danny’s playground and the toolbox was his toybox.  Like his dad, Danny had a talent for fixing things and a passion for going fast!  Following in his dad’s footsteps, Danny worked as a diesel mechanic throughout his life and had a rotating collection of classic cars and motorcycles that he fixed up and drove fast.  The pandemic brought speed-loving Danny’s life to a screeching halt.  Danny’s sister Cindy knew that even though he is never one to complain, Danny needed something to put the wind back in his sails…or gas in his tank!  After months of adjusting to the “new normal,” she contacted Dreamweaver to help! 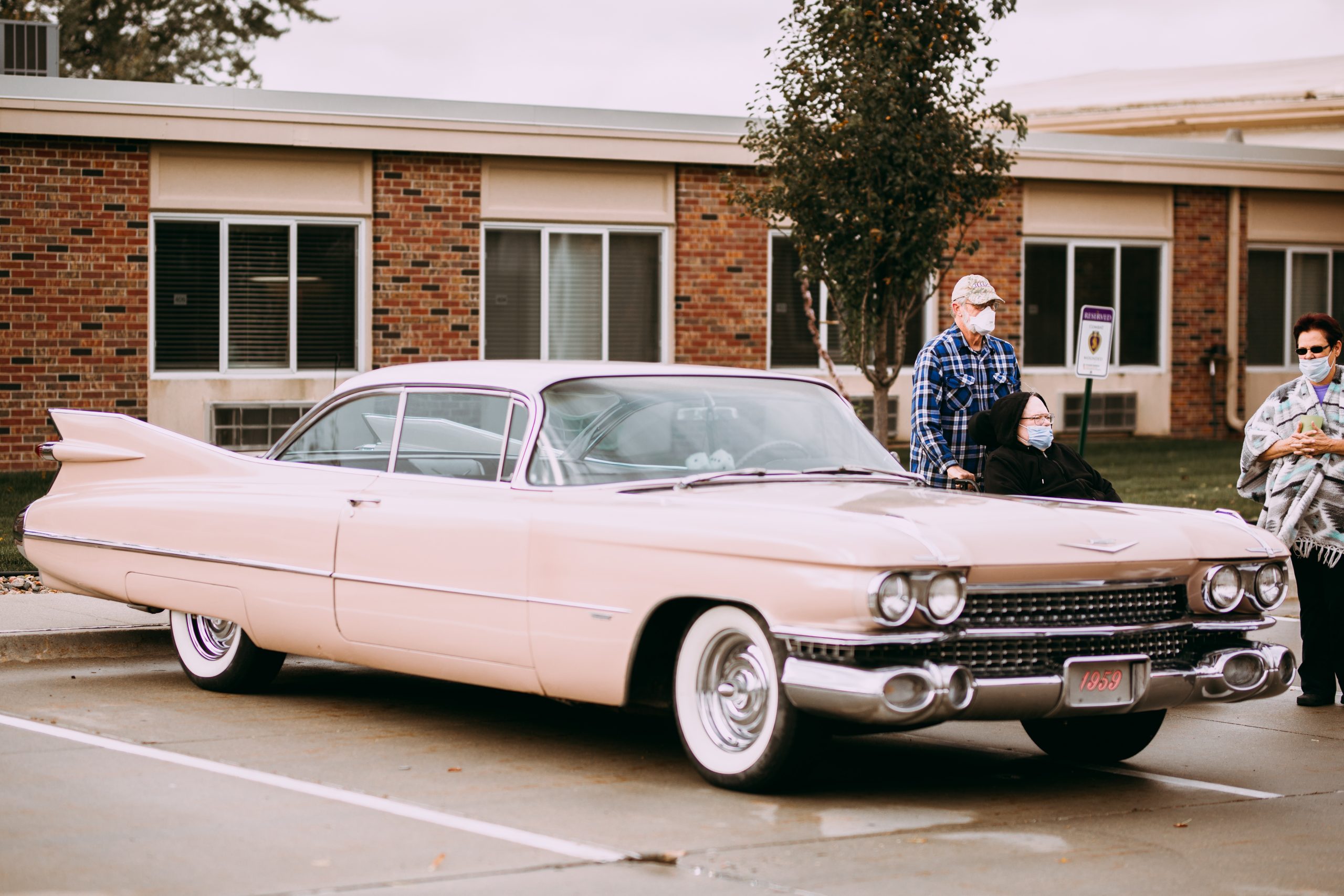 When we met Danny for his interview, we were struck by his humble nature.  He was astonished that Dreamweaver Foundation would want to do something just for him and he requested that we plan something that the other residents would enjoy as well.  Danny’s facility, Life Care Center of Elkhorn, was wonderful to work with to plan his Dream.  While COVID restrictions prevented Danny from leaving the facility, they worked with us hand-in-hand to bring the dream to Danny.

Knowing that classic Corvettes are Danny’s favorite, we contacted the Midwest Early Corvette Club and invited them to set up a car show for Danny and the other residents at Life Care Center of Elkhorn. We were thrilled that they accepted our invitation despite it being so late in the car season.  Humble dreamers like Danny often need encouragement to Dream Big.  We asked Danny what else would make his dream special. After a few minutes of serious contemplation, Danny had an answer: Tacos!

The weather on the morning of the car show was cold and gray with a chance of rain.  The Midwest Early Corvette Club could not guarantee full attendance but said that members would show up if they were willing to brave the elements in their precious rides. To our delight, a couple of members didn’t let the weather scare them away from bringing this dream to Danny and the other residents. Danny, his family, and the other residents didn’t mind getting bundled up to go outside and admire the beautiful classic cars: a 1990 Corvette, and a 1959 Cadillac.  A lunch of Danny’s favorite Mexican food helped everyone warm up.  While it was a pleasure to do something special for all of the residents at Life Care Center of Elkhorn, Dreamweaver Foundation wanted to do something special just for Danny, so we gave him a model Corvette to assemble and enjoy!

Dreamweaver Foundation would like to thank the Midwest Early Corvette Club and La Mesa Mexican Restaurant and Life Care Center of Elkhorn for their help in bringing this special Dream to Danny.  We would also like to thank Amber Rae Photography for helping us capture the magic of this day with her camera!