A Night at the Ball Field

Craig’s love for baseball began at an early age.  Craig was born in Kansas City, Missouri, so naturally his favorite team was the Kansas City Royals.  However, when Craig was just 13, his father’s job with Pamida moved the family to Omaha.  Craig quickly developed a love for another team, the Creighton Bluejays!

Craig started playing baseball in 1965 founding Keystone Little League teams.  He played for a couple summers, but found more enjoyment in the game by cheering on his favorite teams at the ballfields and watching games on TV.  Throughout his entire life, his love for baseball grew and grew.

In Craig’s later years, he developed kidney disease, but Craig never let his diagnosis interfere with his love of baseball.  He continued to watch as many games as he could on TV; quietly cheering from his room at Sorensen Home.  When his nurse, Gretchen, from AseraCare Hospice learned of his love for the game and for the Creighton Bluejays, she knew just who to call.

When we met Craig, he was sitting outside, soaking in the warm sun.  He quickly let us know that his dream was to feel like a kid again — he wanted to attend a Creighton Bluejays baseball game at TD Ameritrade Park. 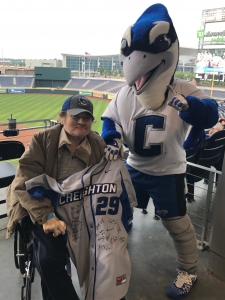 Craig arrived to T.D. Ameritrade Park beyond excited to attend the game!  He was joined by his sister, Cheryl and her husband and his caretaker and nominator, Gretchen.  When he finally got to his seat, all he could say was, “WOW!” During the game, Creighton’s Athletic Department and Billy Bluejay presented Craig with a signed jersey and ball from the entire baseball team. Craig watched his Bluejays battle against the UNL Huskers while enjoying a hotdog and peanuts.

Gretchen told us Craig does not smile very often, but he would smile and get excited anytime someone mentioned his upcoming Dream.  Even weeks after this Dream, Craig still gets a big smile on his face when anyone asks him about the game.