Growing up in Orange County, California it was normal for Clarke to have sand between his toes and a mouth full of oranges or strawberries.  He was also used to surfing extreme waves in the Pacific Ocean. He was around 13 years old when he saw snow for the first time! 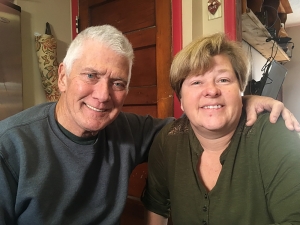 Clarke and his two best friends spent their days surfing swells and eating as many strawberries as they could while working in the strawberry fields. He vividly remembers attending dances at Disney Land. Even his high school prom and graduation were held at Disney Land. After high school, Clarke enlisted in the US Navy training Vietnam War pilots. After dedicating four years to serving his country, Clarke earned his marketing degree from Cal Poly Pomona. For years, he traveled around the United States as a salesman…California was always his home, but he moved north to Tahoe for about 10 years. He traded his surfboard for a snowboard, shredding down the Sierra Nevada mountain range. After years and years of traveling, he was tired of living out of a suitcase.  So, in 2004, he took a sales and marketing job in Omaha, NE with Interlink Supply.

It didn’t take him long to meet the love of his life, Lisa who also worked for Interlink Supply. Lisa and Clarke have now been happily married for 13 years. In 2013, life threw Clarke a big wave, he suffered two heart attacks, underwent surgery for ½ lung bypass and hernia. In 2014, Clarke was diagnosed with brain and lung cancer. For the last 4 years, he has fought and Lisa has been with him every step of the way.

Clarke has always been dreaming of returning to Orange County.  It has been nearly 30 years since he has visited Southern California. The last time he saw his sisters was in 2009 at his brother’s funeral. Lisa was talking about Clarke’s dream with her best friend, Barb, and Dreamweaver Foundation was mentioned.

After months of planning, Clarke and Lisa were on a plane from Omaha to San Bernardino. He couldn’t believe how much had changed. The area that was once miles and miles of orange and strawberry fields was now housing and shopping developments. Home purchase prices were now reaching $1,000,000; when he was a young boy he remembers thinking $20,000 for a house was expensive.  Even with the changes, he enjoyed seeing his “old haunts.” He spent cool California nights catching up with his two best friends by a fire in the hotel courtyard. The surprise of the trip was visiting with his two sisters, Linda and Cindy, and his two great-nephews who traveled from Northern California and Arizona to see their brother.

Clarke expressed his thanks to Dreamweaver Foundation for this gift. He wasn’t sure if he would ever be able to visit California and it felt great to be home again.

Thank you to our dream partners Travel and Transport, VIP Limo and Liberty Medical for helping to make Clarke’s dream possible.