Della and Cindy are friends and residents at Hooper Care. They have the same dream on their Bucket List, to attend a Nebraska Husker game in Memorial Stadium. 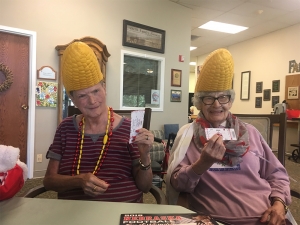 Cindy’s love for the Red and White started when she was a young girl. Every Saturday, she sat next to her parents on the couch. For 33 years, she and her husband, Leonard, sat on their couch in Fremont, cheering on The Big Red. Their favorite tradition was eating out after each game; celebrating a victory or sulking over a disappointing loss. Over the last few years, Cindy’s Parkinson’s, COPD and Dementia symptoms have increased. However, that has never stopped her from watching the games. Now, she cheers on the Huskers from her couch at Hooper Care.

Della and her husband loved caravanning with friends to most of the Husker away games in the 70s. They loved traveling, so this was the perfect excuse to get a bunch of friends together and see the different parts of the United States. In all of the Husker games she attended, she never watched a game in Memorial Stadium.

Tammy, Life Enrichment Director at Hooper Care, first heard about Dreamweaver Foundation’s mission at a Vetter Senior Living conference. She instantly thought of nominating Della and Cindy to fulfill their Husker dream! Dreamweaver Dream Coordinator, Ashley, surprised the ladies with the good news, they would be attending the Nebraska vs Purdue game on September 29th. They couldn’t believe their dream was about to come true. That evening at dinner, they were whooping and hollering in the excitement of what was to come in a few weeks.

A few days before the game, Ashley presented Della and Cindy with their game tickets and all the Husker gear that they would ever need, including a corn head. Finally, it was game day! It was a typical fall Nebraska day, chilly and overcast…perfect day for a football game! Della, Cindy, Leonard, Della’s granddaughter, Tammy and Diane, Hooper Executive Director, let for Lincoln in the van ready for the game, but not before stopping at Applebee’s for lunch. When everyone’s bellies were full, they headed to the game and met up with Della’s daughter and son-in-law. Della and Cindy had a look of awe on their faces as they viewed Memorial Stadium for the first time.

“It was out of this world to be in the stadium”, Cindy told Leonard. “It’s something we’ve only seen on TV, never thinking we’d be sitting here watching the game”. “It was just spectacular.” Due to Cindy’s Parkinson’s diagnosis, she doesn’t always express herself, but on this day, Leonard could tell she was in awe by the look in her eyes. Della and Cindy are still on cloud nine from attending the game. Going back home from Hooper, they all were laughing and reminiscing about the memories they just created. Leonard said, “It was like we were on a party bus. We all were having such a great time”.