Working hard to raise their family, Charlie and Deb Evans had always looked at a trip to Alaska as something they would accomplish later in life, once his family was secure, grown and able to take care of themselves.  In 2010, Charlie Evans, a Vietnam Veteran and Mason, was diagnosed with Stage III Colorectal Cancer (colon or rectal cancer) and he had lesions on his lungs.  Charlie’s dream of going to Alaska began to slip away.  Over the past four years, Charlie has endured chemotherapy, radiation, multiple surgeries with post-surgical complications following each one.  Due to his illness, Charlie lost his job and income, therefore, he and Deb have lost their home on an acreage that they once lived and are now completely consumed with medical bills.  Charlie had always dreamed to see Alaska so on Saturday, June 7, 2014, Charlie and his wife Deb never would have thought that they would be on a flight taking them to the beautiful state of wildlife and glaciers! 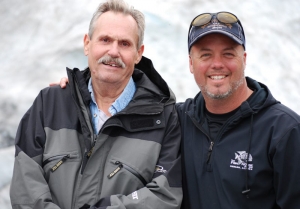 “We started the day with a smoked salmon omelet at Alaska Nellie’s cafe.  We went sightseeing all afternoon and saw amazing sights.  The Exit Glacier hike was especially beautiful!  It was about 1 mile up and Charlie did well!  Back at the cabin we ate fruit and a cheese snack and then geared up for Chinook’s restaurant tonight to eat halibut and king crab.  Yup we are in heaven!  We saw an eagle swoop down on some seagulls and swipe salmon right from under them!  Then we saw a show off sea otter floating on its back and spinning in the water.  Berry pickers were along the roadside and salmon “snaggers” fishing the bay.  What a great place!”

“This morning we were up at 8:15am.  We had to put fire in the wood burner!  Today calls for a high of 52 and a low 43 degrees.  Soon we will be heading to our glacier cruise and will be back around 5:30pm. Dana is cooking dinner for us tonight—more salmon, yummy!”

“The glacier cruise was beautiful and we enjoyed a late lunch, the menu was salmon and prime rib!  Prime rib?  Yea right, not in Alaska if you’re from the Midwest!  Salmon here I come!  Can’t get enough of this place!  We are having the time of our lives!”

“Today we went on a halibut fishing Excursion that turned out to be a long day on the boat but quite an experience!  We each caught 3 but were allowed to keep 2 each!  We had a great time and are both pretty tired.  I guess we aren’t in out 20’s anymore but somehow our brains seem to think so!  I had to hang on as the seas were a bit rocky!  Charlie caught a quilled back rock fish that is really funny looking and Deb caught 3 dog fish that is a small type of shark!  In the morning we’ll head for Denali!” -Thursday, June 12 through June 16, 2014- Charlie and Deb were taken to the North Face Lodge, about 90 miles deep into Denali.  While in Denali, they will enjoy three evenings, top-of-the-line cuisine and a tour with Homeland Huskies, the only remaining purebred Iditarod Dog Facility and while there they will get to meet Alaska’s Iditarod team, hold pups and visit with Iditarod champ Jeff King!  As it turned out, they were not able to attend this excursion as Charlie was pretty exhausted.

“We are down from Mt. McKinney and sitting at a train station awaiting our connection to Anchorage where we get to stay at a bed and breakfast!  Today we saw some moose and caribou on our way down!  We had a fabulous time at North Face.  We had very little R&R as there was so much to do and so much to see!  We met many interesting people who were visiting the lodge and we learned about the local foliage and flowers.  The food was some of the best we had ever eaten!  This has been such a wonderful trip!”

Since Charlie and his wife, Deb, have been back from their amazing trip to Alaska, Deb writes:

“It has been a busy couple of weeks for Charlie.  He has seen an Oncologist, had a CT scan which showed some areas of concern in addition to those we were already aware of so he was sent for a PET scan.  The worst has been confirmed and the cancer appears to have spread even more.  He is going to be starting Chemotherapy and will receive treatments for the next six months.  He is up for some rough times ahead.  I am so glad that we went to Alaska when we did.  He is still talking about the trip and telling people all about it with a big smile on his face.  We keep telling people that if we come up MIA, they know where to start looking!”

Thank you to The Dreamweaver Foundation for making this Dream possible for Charlie.  Thank you to board member, Carly McCulloch, for her countless hours in creating the itinerary for Charlie and his wife, Deb, and for arranging all of the transportation and lodging.  Thank you to pastor Dana in Seward, Alaska for providing some of the lodging, transportation and meals for Charlie and Deb during their stay and thank you to those who donate to The Dreamweaver Foundation.  Because of you, Charlie’s Dream of going to Alaska came true.