Chuck’s love for the game of baseball runs so deep, it is hard to discern whether his passion is a product of nature or nurture. Growing up in O’Neill, Nebraska, Chuck, and his siblings were always out on a sports field. Baseball season was a special time of year though because Chuck’s dad, Fred, was the town’s prominent baseball coach. Fred instilled a love for the game in every athlete he took under his wing. The St. Louis Cardinals were his favorite team, and he showed his support by naming his boys’ team “The Cardinals” year after year, and by piling the family into the station wagon for annual road trips to St. Louis. Chuck smiles as he recalls going to Busch Stadium with his family, baseball glove in hand, in case he got lucky enough to catch a stray ball! Fred instilled a love for the city in Chuck too, showing him all the best spots, including Stan Musial’s steakhouse, where if you got lucky you might be able to score a glimpse or even a high five from your favorite player as they grabbed a bite after an exciting ball game! 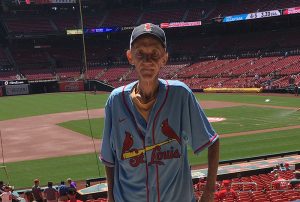 Chuck and his brothers continued the tradition of making the trek to St. Louis every summer to root on their adopted home team. Chuck lights up when he talks about his experience of watching his favorite team play in two different World Series match ups! Allie, Chuck’s hospice social worker from Hillcrest, noticed the sparkle in Chuck’s eye as he reminisced about the Cardinals, and she called Dreamweaver to take him out to a ballgame!

When we met Chuck and his brother Kelly it was clear that they were die-hard baseball fans. With a laminated baseball schedule stuck to their fridge, and the TV tuned to ESPN, these two did their best to never miss a game. 2020 was the first season that they had ever not been able to attend a game, and they were worried that Chuck’s illness would interfere with them getting to the ballpark again this year. But plans for their trip came together very quickly, because the brothers exuded the confidence of having “been there and done that” so they knew exactly where to go—what games to attend, where they wanted to stay, and what they wanted to eat! We did our best to give the brothers a true VIP baseball experience by outfitting Chuck in Cardinals gear; setting them up with limo transportation to and from the airport; a room at the Hyatt Regency—within walking distance of the stadium; all-inclusive tickets to two games against the Marlins that included full access to the Champion’s Club lounge; and passes to the Hall of Fame Museum.

Chuck and Kelly had a fantastic time in St. Louis! They had plenty of time to relax, enjoy their room and explore the city between games. They loved their seats in the Champions Club Suite at Busch Stadium, and the dinner they had at their favorite Italian restaurant. And despite all the planning and care that went into creating this VIP Baseball Dream for Chuck, his favorite part of the whole experience was beyond our control—the Cardinals won both games!