Cecilio grew up in Texas as the oldest of eight siblings. He and his family worked on farms and ranches until they moved to Nebraska in 1955. Following in his family’s footsteps, he met his wife, Flora, and they had eight children as well. 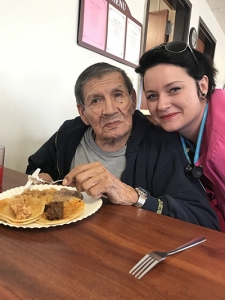 During the 1960’s and 1970’s, Cecilio enjoyed watching western movies and tv series. He and his family, particularly his son Cecil, would go to the movies together. He was also deeply passionate about his Mexican heritage, singing and dancing to Mariachi music while eating delicious Mexican cuisine.

When Keely from AseraCare Grand Island nominated Cecilio to receive a Fiesta Dream, Dreamweaver happily worked on getting him his authentic Mexican meal. With colorful plates and fun decorations, Cecilio and 20 other residents from Golden Living in Grand Island celebrated a true Mexican Fiesta. Other staff and AseraCare workers came along and enjoyed the tacos, enchiladas, and spicy salsas.

A giant smile spread across Cecilio’s face as he was enjoying the party made just for him. Dreamweaver was happy to provide an experience that reminded Cecilio of his rich Mexican culture, surrounded by music and laughter.

Thank you to Keely from AseraCare Grand Island and Golden Living for making Cecilio’s Dream possible.