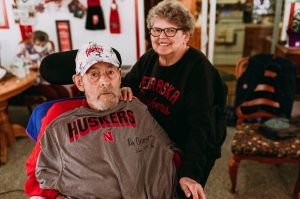 For Butch, Husker football has been a Saturday tradition for as long as he can remember.  No matter what else was going on in Butch’s busy life, he always tuned into the game.  On the rare occasion when he’d have to miss a game for a family wedding or other big event he’d record the game, and Butch’s family and friends knew better than to mention the score or any highlights to him before he had a chance to see it with his own eyes.  Butch is a family man who shares his love for the Huskers and a strong faith in God with his wife, Marletta. The pair raised their children and many foster children with these values.

A master woodworker, Butch’s friends and family have all received a customized Herbie Husker under their Christmas trees.  Butch also put his skills to work building shelves to hold his Husker collectables, and a big red and white workshop in his backyard.  You can’t miss Butch’s house in La Vista, especially at night, as it is adorned with red and white Husker accents, and a Big N (for Nebraska) lights up the night sky. Just like his tv during the football season, a room in Butch’s basement is totally devoted to his favorite team, where he has his prized Husker artifacts on display.  And in true Husker spirit, Butch even named his tough-looking little dog Bo (Pelini) after a former Husker coach.

Butch is the kind of guy who will do anything to help anyone.  This kind of person tends to attract help when they need it, and when Jean, his Social Worker from AseraCare Hospice, noticed that Butch needed something to look forward to, she nominated him to receive a Dream.  Dreamweaver staff met Butch on a Tuesday for his interview, and he told us how he had rooted for the Huskers for as long as he can remember.  Butch told us that he had always been impressed by Coach Ron Brown’s way with the players.  Butch admired how the Coach would lead the players in prayer, and he told us how much he would like to meet Coach Brown and shake his hand.  While it’s hard to promise to fulfill this type of specific request involving a celebrity, we told Butch we would work with our connection at the Huskers to see if we could possibly set up a virtual or in-person meeting. Coach Brown was so touched by this request that he carved out time in his schedule, and two days later he met us at Butch’s La Vista home to fulfill his Dream.

When Coach Brown pulled up to the home, he was greeted in the driveway with a hug from Butch’s son who told him how much the meeting meant to Butch and the entire family.  A smile spread across Butch’s face as Coach Brown entered the home, and he welcomed the coach as he would an old friend with a big, “How’s it going?”.  Butch’s family (all Husker fans) had also gathered for the Dream, and they were all star-struck as the larger-than-life football hero presented Butch with a football signed by Coach Scott Frost and himself, and a hat.

Dreamweaver Foundation had hired a professional photographer to be there to capture the smiles, laughs, and tears, as Coach Brown spent more than an hour talking with the family about faith, football, and life.  Coach Brown thanked the couple for their commitment to raising foster children, as this is a cause that is close to his heart also.  Coach Brown called Scott Frost during the visit and allowed Butch to FaceTime with one of his Husker heroes.  Before he left, Coach Brown thanked Butch for his loyalty to the Huskers, then joined hands with the family in prayer around Butch.  Though they had never met before, Butch and his family connected with Coach Brown on so many levels that they felt as though he was a member of the family.

Amber Lihs Photography captured so many magical moments between our Dreamer, his family and the Coach, that we know the photobook capturing his Dream will hold a special spot within Butch’s collection. And we know that Coach Brown’s visit will go down in Butch’s family history, much like the Game of the Century!   Dreamweaver Foundation would like to thank Coach Ron Brown for answering our call to fulfill this Dream for Butch.