For Bill, family is everything.

Bill grew up in Fremont, Nebraska and graduated in 1978 from Archbishop Bergan Catholic.  Bill met this beautiful girl while working at a gas station outside of town.  And they spent ten years in Tallahassee, Florida working the BBQ restaurant and catering scene before moving back to Fremont to be closer to their families.

In 2000, Bill married that beautiful girl.  Two short years later, their daughter Haley was born and in 2009 their son Will arrived.  As a family, they enjoyed traveling and vacationing. Some of their most memorable destinations included Great Wolf Lodge in Kansas City, Keystone, San Diego and the Henry Doorly Zoo.

In 2012, Bill was diagnosed with lung cancer. For years he fought it and won. During those years, his wife was also battling her own lung and brain cancers.  In July 2017, Bill tragically lost his wife of 17 years. 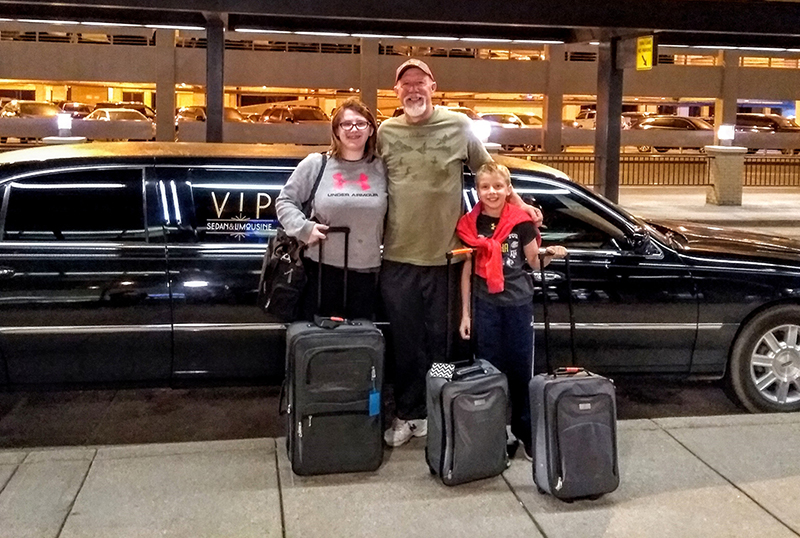 Holly Adams, Social Worker at CHI Oncology, has crossed paths with Bill during his chemo treatments over the last several years. She decided he would be an excellent candidate to receive a Dream. After she and Bill spoke about Dreamweaver, she decided to nominate him.

Fast forward four months, to the early morning hours of April 17th. Bill and his two kids were escorted by VIP Limo to jet off for a family vacation to Universal Studios. Bill, Haley and Will spent six days and five nights at Universal Loews Pacific Resort in the Universal Studios park.

In between snacking on VooDoo Donuts and slurping down Harry Potter’s Butter Beer, they rode every ride imaginable. Bill and his family enjoyed The Amazing Adventures of Spider Man, Jurassic Park River Adventure, and Despicable Me Minion Mayhem. But their favorite rides were Harry Potter and the Forbidden Journey and Harry Potter and the Escape from Gringotts.

After a long day of rides, the family continued the fun by soaking up the Florida sunshine at the pool. One evening, Bill was so excited to get in the water that he cannonball jumped in with his cellphone in his pocket! They all laughed at the hilarious mistake that would become a favorite memory.

Bill, Haley, and Will sang along to songs at Pat O’Brian’s Piano Bar at CityWalk and met a look-alike Marilyn Monroe. They took photos, told stories while waiting in line, and laughed until their bellies hurt.

Their Florida adventure ended and the family headed home to Nebraska. They brought the sunshine back with them in the form of warm smiles and memories together.