Warren and Jeanine Benson, residents of the Omaha area, are no strangers to caring for others.  Ruth Hamlin first brought this couple to our attention when she nominated them to be recipients of a “Dream.”  Ruth stated that the Benson’s, “were the most loving and dedicated caregivers she had met in her 18 years of working with family caregivers.”  When she  first met the Benson’s in 2008, Ruth remembered, “Jeanine was slumped in a wheelchair, a victim of MS.  Warren, having a rare sleep disorder (Central Nervous System Hypersomnia + Cataplexy), literally dozed in and out during the workshop.  At the time both Warren and Jeanine were exhausted, overwhelmed, and steeped in caring for their parents while trying to keep each other healthy.  Jeanine’s goal, by her own words, was to live long enough to assist her parents until their death.”  The last of their parents passed away in 2011 leaving them to have some time for themselves and to put their own lives together.  Ruth stated that, “All that changed in February when Jeanine took a tremendous fall causing a sever break to her shoulder resulting in several surgeries and much physical therapy, all being complicated by her MS.”

“In spite of the challenges this couple has faced they are cheerful and loving always showing gratitude for what they have been blessed with and never complaining about what they have missed.”  Ruth finished by saying, “they are an inspiration to anyone who knows them and an example of what a loving spirit can accomplish.”

When The Dreamweaver Foundation contacted the Benson’s, they were overwhelmed.  They could not believe that they were chosen.  When asked what they would like to do for their “Dream”, they stated that it had been nearly 15 years since they had gone out to a nice dinner.  They also thought it would be wonderful to go to the symphony, as music was so important to Jeanine who had been a music instructor before retiring.  With that said, because they didn’t get to go out often, they were unsure that they had the proper attire for a night out on the town. 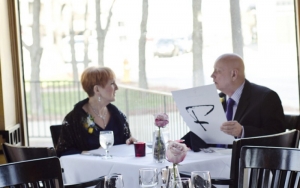 We were so excited to take the steps to make their evening one that they would always remember.  It began with some of the Board Members taking Jeanine out to Von Maur for a day of fun and shopping.  When we arrived, Jeanine’s wonderful personal shopper, Evelyn, had several evening dresses all ready for Jeanine to try on and to select the one that she liked best.  After several hours of trying all different styles on, Jeanine picked her favorite that she looked gorgeous in.  She said, “Oh, Mama, this is FUN!  This is dress-up with a capital D!”  Jeanine was ready for her special evening with a new dress, shoes, jewelry, purse and an elegant wrap!

Next was Warren’s turn.  Ron picked up Warren and Jeanine and took them to the lovely clothing store, Parsows.  Larry was all ready for their arrival with many fabulous items lying out for Warren to choose from.  He was so helpful and treated Warren like a King!  Warren was fitted for a new jacket, pants, shirt and tie.  He looked like a million bucks!

To save money over the years, Warren would help Jeanine cut and color her own hair.  So, on April 19th, the day before the Benson’s outing, Jeanine was taken to Kathleen Victor who treated her to a “New Do!”  Jeanine was beautiful before, but after Kathleen worked her magic, Jeanine was definitely ready for her night out.  The only thing left was her make-up!  Thus, Kelsey and her husband, Chad, picked Jeanine up the afternoon of their  special evening and took her to have her make-up professionally done!  Jeanine couldn’t quit looking at herself in the mirror . . . and neither could the people passing by!

Afterward, with the help of Kelsey and Chad, the Benson’s were dressed and ready to go.  On cue, a beautiful silver BMW, with a hired driver, pulled up to whisk the Benson’s off for the fairytale evening.

The first stop was for their dinner at one of Omaha’s favorite, The Flatiron.  Warren and Jeanine enjoyed a wonderful meal as they sat in their window seat gazing at downtown Omaha.  When dinner was finished, it was time to be driven to the Omaha Symphony’s Pirates of the Carribean at the magnificent Holland Center.  They were met by one of the Board Members, Carly and her daughter and daughter’s friend.  Upon exiting the car, they were presented with a bouquet of flowers and cards made by the children.

One of the Captain Jack Sparrow’s lines in the movie was, “Mate, if you choose to lock your heart away, you’ll lose her for certain!”  This is something that the Benson’s have never done.  They have put their hearts out there for all they know, always willing to lend a helping hand and take care of those they love.  April 27th was a night that The Dreamweaver Foundation was able to show them a small amount of gratitude for all they have done for others!

The Dreamweaver Foundation would like to acknowledge those that made this “Dream” so successful.  Thank you, Ruth, for nominating this wonderful couple.  Your generous heart and support of the Benson’s is inspiring.  Thank you, Evelyn and Marlita, for helping Jeanine with her wardrobe and make-up.  She felt like a “Princess!”  Thank you, Kathleen Victor, for donating your time and talent in transforming an already beautiful woman to someone Warren couldn’t take his eyes off of!  Thank you, Larry and Parsow’s, for the contribution and help you gave Warren in making him feel like Jeanine’s “Prince!”  Thank you, Piccolo’s, for donating the beautiful corsage and boutonniere that finished off the Benson’s outfits.  Thank you, Flatiron, for the service you gave to make their night a memorable one!  Thank you, Holland Center, for contributing toward the tickets that swept the Benson’s to another land!  They were mesmerized!  Thank you, Tad & Melissa Singer, for providing your beautiful car and a driver to transport Warren and Jeanine on their special evening.  They felt like “Royalty!”  Thank you, Jack Griffey, for driving the Benson’s and making sure they were taken where they needed to be and escorting them safely home!  Thank you, Catherine Bosley, for being their every step of this journey, with your time and talent, and capturing each special moment with pictures that Warren and Jeanine will always be able to look back at and remember their very special evening!  You are the best!  And, lastly, I would like to thank all of The Dreamweaver Foundation’s Board Members for your many hours of planning and preparation.  This evening, and our very first “Dream” couldn’t have taken place without all of your effort!