Benedykt moved with his wife, Danuta, and their two sons to the United States in 1984 as a political refugee immigrant from Poland. They thought they were going to Omaha, NE, but were sent to New York City. Ben and family to this day still remember the terrible living conditions in New York. They were scared and overcome with grief. St. Leo’s Catholic Church in Omaha, did everything they could to support and arrange their move from New York City to Omaha within a week of arriving in the United States. They were and still are very grateful for St. Leo’s. 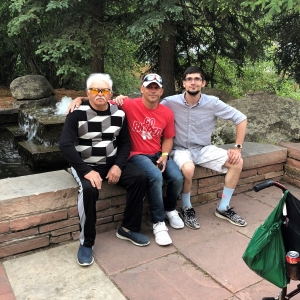 Danuta and Ben learned to love the outdoors of Nebraska with their boys. Continuing activities they enjoyed in Poland: camping, fishing and gardening. Often traveling across the country for fishing trips. Ben even traveled to Canada a few times and Alaska, where he caught his large game fish that sits proudly mounted in his home. Ben loves reminiscing about his fishing adventures with his sons.

Danuta sadly passed away in 2017. Since his wife’s passing, Ben has expressed his wish; one more family fishing vacation. In the last few years, Ben’s health has started to change; his memory loss and speech have reverted-back to Polish. The long trips have stopped but he still continues to fish at ponds and lakes close to home. His sons wanted to take him on one more fishing trip to have enjoyable memories before their father loses all of his memories.
When Sarah from ENOA, heard about Ben’s wish, she quickly nominated him to receive a dream from Dreamweaver Foundation. When Ben heard he was fulfilling his fishing dream, he knew exactly where he wanted to go, Estes Park, Colorado! On Father’s Day, Ben and family set out on the road for Colorful Colorado! After 10 hours of driving through the plains of Nebraska and Eastern Colorado, they finally arrived in the Rocky Mountains.
Ben enjoyed his days fishing in the cool, crisp mountain air. Even though, they only caught three fish during the entire trip, it didn’t matter. He was enjoying making memories with his sons, daughter-in-law and grandchildren, watching wildlife around the cabin and even laughing when he felt a little dizzy from the altitude.
Thank you Sarah from ENOA for nominating Ben to fulfill his dream!