Ben’s daughter Cheryl recalls the days she found her father under the hood of a Corvette. He would be putting together or taking apart pieces of the car to restore and create something beautiful. Ben loved Corvettes—in addition to his wife and children, the sleek sports cars were his true love. 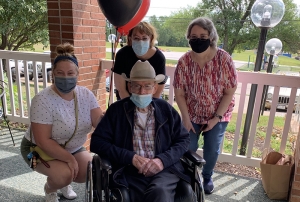 Ben had been a member of the Midwest Early Corvette Club for decades. He attended meetings, traveled to car shows, and made great friends who shared an interest in and appreciation of Corvettes. He spent many years working to restore cars nose to tailgate, with new paint, new engines and refreshed interiors so that he could share the beauty of the car with others.

At the age of 101, Ben no longer restores Corvettes like he used to but his love for the cars remains strong. When Jeff from Serene Care Hospice talked to Ben about Corvettes, he knew he would be a fantastic candidate for a Dream.

Jeff nominated Ben in February to receive a Dream from Dreamweaver Foundation.   With the help of the Midwest Early Corvette Club, a car show and special ride was set up for mid-March. However, because of COVID-19 his Dream had to be rescheduled. With a few tweaks and changes, Ben was going to still get his Dream, just in a different way.

On a beautiful sunny Sunday in July, Ben and his daughters waited patiently at the curb outside his nursing home. With masks on and social distancing in place, everyone was ready for a Corvette Car Parade!

Red cars, blue cars, silver cars, green cars—Corvettes from different years and different styles—drove by honking and waving. Many of the drivers knew Ben from years before. With a gigantic smile spread across his face, Ben waved cheerfully to his friends in the cars driving past him. Some friends held signs, others offered a big, “Hey Ben! We miss you!”. His daughters were cheering. It was brief, as the Corvettes were headed to a car show across town, something Ben had done time and time again. But simply the sights and sounds of the cool cars brought great joy to this former rider.

Thank you to Prestige Care of Plattsmouth and Midwest Early Corvette Club for making this Dream possible.