Barbara’s sister, Cindy, learned about Dreamweaver Foundation through Hillcrest Hospice. She wasn’t sure what her sister’s dream would be, but she wanted to do something that would put a smile on her sister’s face. Barbara is a fan of Rock and Roll. She grew up in the 70s when Rock and Roll was at its peak. Fleetwood Mac and Bruce Springsteen are her absolute favorite. In fact, Barbara is probably the biggest Bruce Springsteen fan you will ever meet! She knows every word to every song! 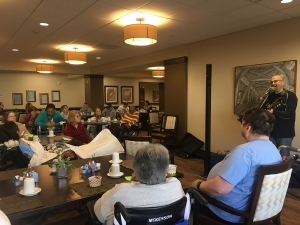 Barbara wasn’t able to attend the most recent Fleetwood Mac concert in Lincoln or travel to see Bruce Springsteen perform due to her MS diagnosis and a few other health complications that can cause difficulties leaving the facility. But, Dreamweaver Foundation Dream Coordinator had a thought, what if we brought the concert to Barbara!

Barbara had no idea what excitement her afternoon had in store for her. As everyone gathered in the dining room at Hillcrest Firethorn with their ice cream sundaes in hand, Dustin West began singing a song from Bruce Springsteen’s Nebraska album. Barbara sang right along with Dustin. All the nurses and staff were touched by Barbara’s pure enjoyment of the music. For an hour, she sang along as the music transported her and the other residents back in time.

Thank you Dustin West and Hillcrest Firethorn for partnering with Dreamweaver Foundation to fulfill Barbara’s dream.